Oh boy have we felt trapped this week we did this! I had two out of my three with chicken pox and one imminent we have had to conjure up all sorts of imagination to keep us occupied, from puzzles to bricks, craft, hunting for dinosaurs and out in the garden digging for worms.

So today we came up with this idea. We would go on a nature trail…outdoors but in our own back garden, and we would stick our findings to a piece of cardboard that we had covered in double sided glue spots. I would have braved going down the trail at the back of house that leads to the park, but I just didn’t have the mindset to stomach the disgruntled looks of other parents, staring at my grotspots as if we have the plague.

So our trek began… (a bit like Winne the Pooh and Piglet on their search for heffalumps!) It was beneficial doing it in the garden because we don’t have a dog, so avoided Noah’s obsession with looking for dog poo and despite it being a complete mess (ignore any laundry, weeds or things we are trying to sell that may be in pictures) it does have some interesting things and a little bit of colour

So here is our piece of card (cut from a good old Cheerios’s box, covered in sticky dots. 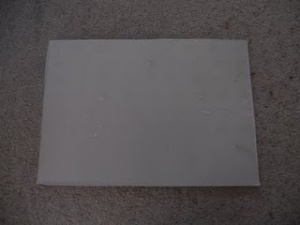 First we stuck on some petals (from my beautiful roses – struck down in their prime due to keeping a 3 year old entertained!) 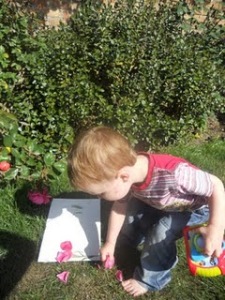 Then some leaves and obviously he had to taken a photo of his own masterpiece! 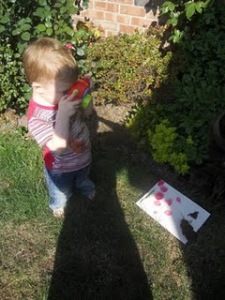 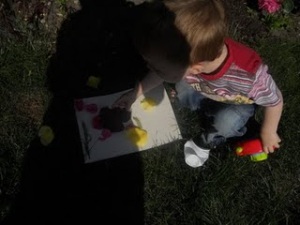 A little bit of grass…obviously! (I did have to try and explain why ants could not be stuck to his creation!)
Voila! Master piece is finished…although he does not look convinced! Maybe tweak it later! 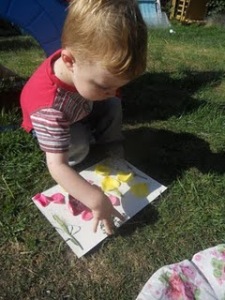 Voila! Master piece is finished…although he does not look convinced! Maybe tweak it later! 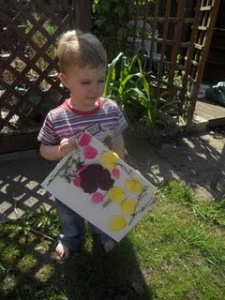 There you have it, some easy craft, nature, science, play and the outdoors all in the comfort of your back garden. You could go further afield if you are not spot infected like we

were!
Give it a go