These easy squeezy bottle rocket spiders are brilliant fun to make and a fantastic introduction to forces, especially Newton’s Third Law of motion.

For every action there is always an opposite and equal reaction.

Imagine a space rocket taking off. The rocket’s action is to push down on the ground with the force of its engines, the equal upwards force pushes the rocket up or if you think about air coming out of a balloon, the air is being forced downwards yet the balloon flies upwards.

We made a spider and a broomstick, but you could make a ghost, witches hat or anything else you wanted. 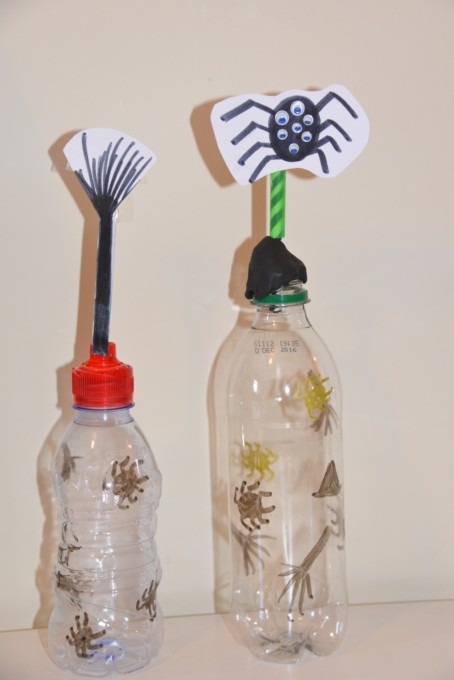 How to make a squeezy bottle rocket spider

Lift up the sports cap and push in half a straw, seal around it with blu tack or plastcine.

Squeeze the bottle and ensure air is coming out of the top of the straw, not escaping from the sides.

For the rocket spider

Draw and cut out a spider shape, add lots of googly eyes.

Seal one end of a larger straw than the one in the bottle with sellotape.

Attach the spider onto one side of the larger straw.

Place the spider straw on the bottle and squeeze hard, the spider should shoot up into the air.

Things to think about

What do you think would happen if the spider was heavier? Would it fly as far?

What would happen if you used a smaller bottle?

Does the spider fly as far if you don’t squeeze as hard?

When experimenting remember to only change one factor at once, so either change the size of the bottle or the weight of the rocker, not both!

If you enjoyed this activity, don’t forget to try our other Halloween Science Experiments.