The brain is one of the most fascinating organs, so today we’re going to make a model brain.

The brain is the control centre for your body and it sits in your skull at the top of your spinal cord. When we mention the word ‘neuroscience’ most people switch off and think it is something they cannot possible understand but…

1. Not when you get to play with play-dough (this keeps me and children of all ages entertained)

2.It is really REALLY interesting!

Your brain keeps on growing until you are about 20 years old.

Your brain has around 100 billion nerve cells

Your brain is more powerful, more complex and more clever than any computer ever built.

It is constantly dealing with hundreds of messages from the world around you, and from your body, and telling your body what to do.

With evolution, the human brain has become more and more complicated, many of its interesting properties are still not well understood by scientists.

The human brain is over three times as big as the brain of other mammals that are of similar body size.

The brain can be divided up into six main areas:

You can then make some flag labels (wrap stickers around cocktail sticks) and label the brain. 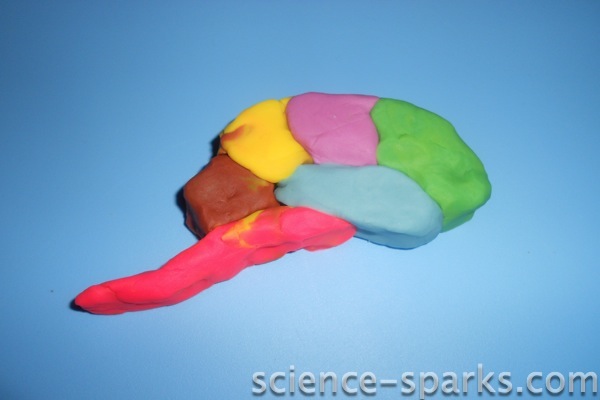 I made this with Noah (who is three) and was really interested in finding out the brain helps you think, talk, see and move and that it is inside your head. He understood there were six parts , in which we practiced counting, and named all the colours, but obviously the names of the parts were a little advanced, however I know my secondary school pupils would have loved this task and in fact even my A level students who are 18! Well who doesn’t love play-dough?