What is a Venn Diagram

A Venn diagram shows the relationship between a group of different things visually, allowing children to sort data into two or three circles which overlap in the middle.

A rule is set for each circle and numbers or objects placed in the overlapping area must follow both rules. Venn diagrams are great for encouraging children to sort objects following rules.

How to make a Venn Diagram with hula hoops

It would obviously be much easier to just draw the circles, but using hula hoops just makes it a bit more fun.

We used a very simple example of likes and dislikes with shared likes in the middle using two hula hoops to make it a bit more visual.

We should really have drawn an outer rectangle encasing both hula hoops, everything inside the rectangle is the set. 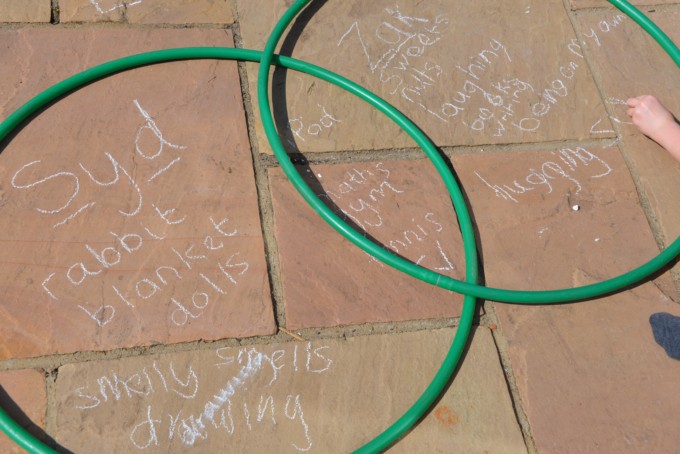 I then let the children have a go using a Venn diagram to sort their Playmobil people depending on the colour of their clothes. The figure on the outside doesn’t have green or blue clothes, while the two figures in the overlapping area have both green and blue clothes.

You could make this even more fun by using dinosaurs, food or likes and dislikes.

More Ideas for Maths at Home

Put together a numeracy box for toddlers and preschoolers.

Try one of our science based maths games