Home » Blow up a balloon with alka seltzer

This is a great, fun way to introduce chemical reactions to children. Even if they’re too young to understand the chemistry behind the reactions themselves, just the idea that a substance can change when another is added is a really useful concept to start to grasp.

We tested alka seltzer and popping candy to see which was the best at blowing up a balloon. You could also try baking soda and vinegar.

Blow up a balloon with alka seltzer 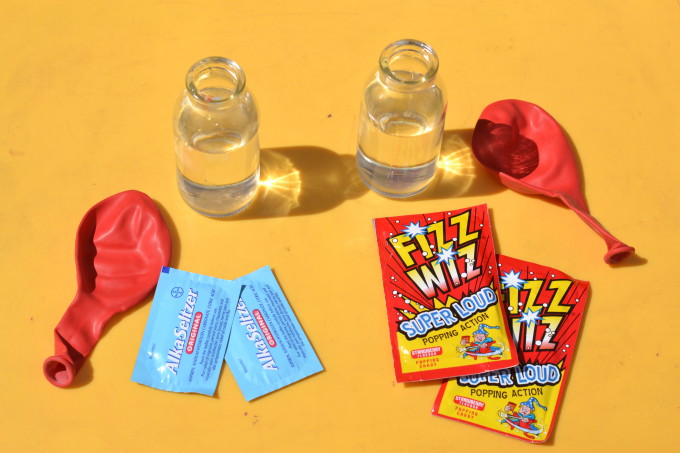 Blow up the balloons first and then let the air out. We found this made them blow up a bit faster during the activity.

Fill the small bottles or jars with water, I left a small gap at the top.

Add the alka seltzer to one bottle and popping candy to another before quickly placing the balloons on top.

Watch as the balloons blow up. 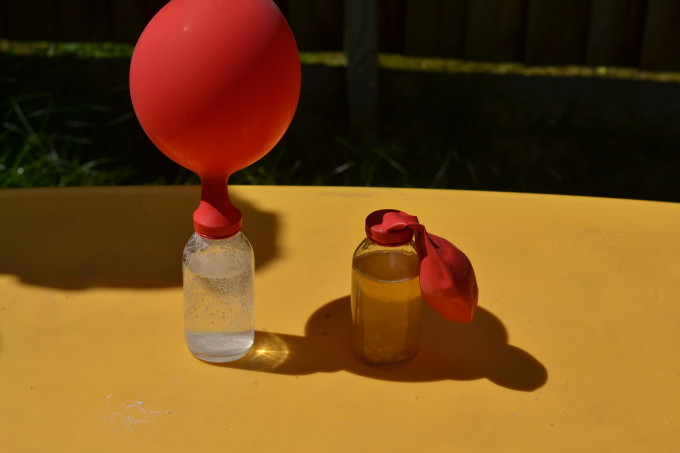 Which is the biggest? Why do you think this is?

Popping candy is made by heating the ingredients and then exposing to Carbon Dioxide ( a gas ) at very high pressures before allowing to cool. Tiny bubbles of gas are trapped in the popping candy. When popping candy is added to water it breaks down and releases the carbon dioxide which then fills the available space in the jar and the balloon.

Alka Seltzer contains contain  sodium bicarbonate ( baking soda ) and citric acid. When you drop a tablet into water it forms sodium citrate, water and carbon dioxide which is the bubbles of gas you see. The bicarbonate of soda reacts with the citric acid, this is an acid – base reaction just like we see when we add vinegar to baking soda.

If you place an acid and a base together, they react to neutralise each other, producing a salt. The H(+) cation of the acid combines with the OH(-) anion of the base to form water.

What happens if you use warmer water in the jars? Does the balloon blow up faster?

What else could you try?

How about baking soda and vinegar?

Now you’ve seen just how much gas is released from an alka seltzer, use one to make a film canister rocket. The rocket blasts off because the gas released builds up behind the canister lid, eventually reaching high enough pressure that the tops blows off! 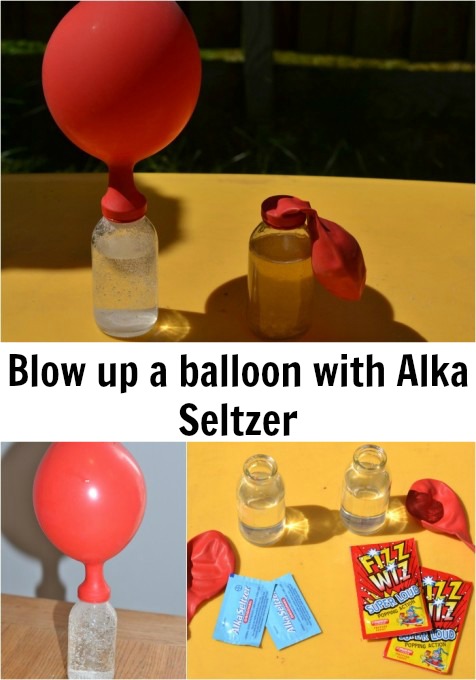