Home » The cow jumped over the moon catapult

Discover how force affects the motion of a projectile and how changing the angle of the launch affects the distance travelled with this easy catapult investigation based around the cow jumped over the moon.

You can see how to build a simple lollystick catapult in this video.

I’ve designed this activity to appeal to young children, but it can easily be extended for an older audience.

Hey diddle diddle, the cat and the fiddle,

The cow jumped over the moon.

The little dog laughed to see such fun

And the dish ran away with the spoon!

Lollystick catapults are inexpensive, easy to make and appeal to children of all ages. I’ve given this one a Preschool/Early Years theme by simply drawing a cow on a ping pong ball, but you could also use a ball as the Moon and investigate the conditions needed to catapult the cow over the moon or even draw planets and lay them on the floor as different targets.

Older children could design and make a target either stuck to a wall, a free standing structure or as a real challenge how about a target that flips backwards when hit?

Write a new version of the traditional nursery rhyme including the words catapult and force.

Write instructions for a game including a catapult and a target.

Create a target ( this could be moon shaped ) with different numbers on different areas,  the children could then keep track of either other’s score over 3 attempts to hit the target. 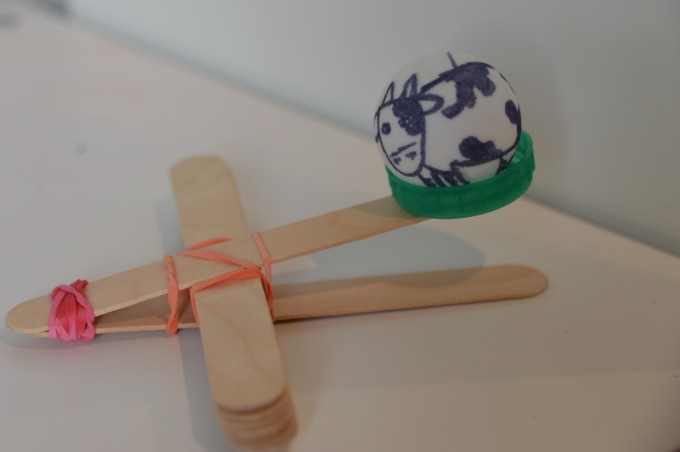 Questions to ask about the cow jumped over the moon catapult

How do you think force affects the speed a catapulted ping pong ball travels?

How do you think force affects the distance a catapulted ping pong ball travels.

How can we test this using a catapult?

The further down you push the milk bottle top, the greater the force applied to the ping pong ball and the faster it will travel.

How to work scientifically

Design a question to answer

Does the ping pong ball travel further if more force is applied?

Does the ping pong ball travel higher if launched from a greater angle?

What will happen if the centre part of the catapult is made taller using more lollysticks?

Make a prediction – for example

If more lollysticks are added to the catapult, the ping pong ball can be launched from a greater angle meaning it will reach a greater height.

Think about how to make the investigation fair, for example use the same catapult, the same person should apply the force, measure from the same release point.

Repeat at least 3 times and find the average distance/height.

Design a method of recording data

How about a table or voice recording?

Do the observations answer the original question? Was the prediction correct? If not why not?

How could the investigation be improved? 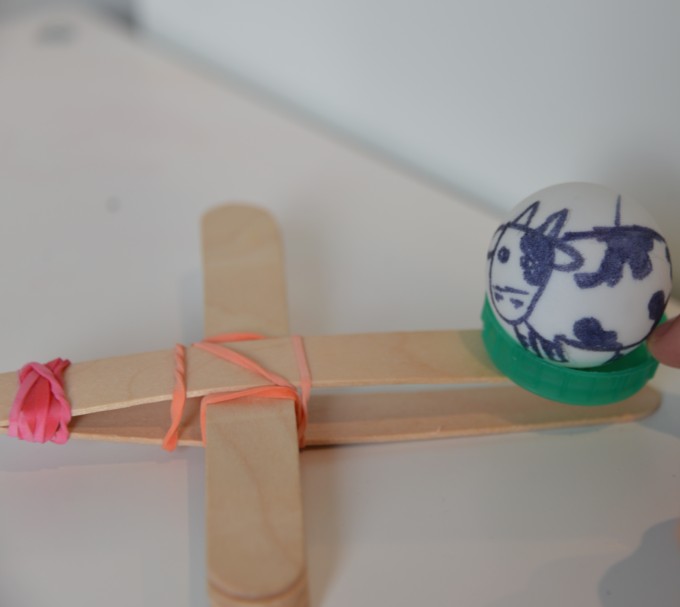 Think about the angle the ping pong ball is launched from. To travel the furthest distance possible a projectile should be launched from a 45 degree angle, more that this and the projectile will go higher, but cover less distance.

Can you draw this?

Projectile – an object that is launched into the air by a force.

Catapult – a mechanism that launches a projectile.

Thank you to the fantastic Imagination Tree for the inspiration for this activity. 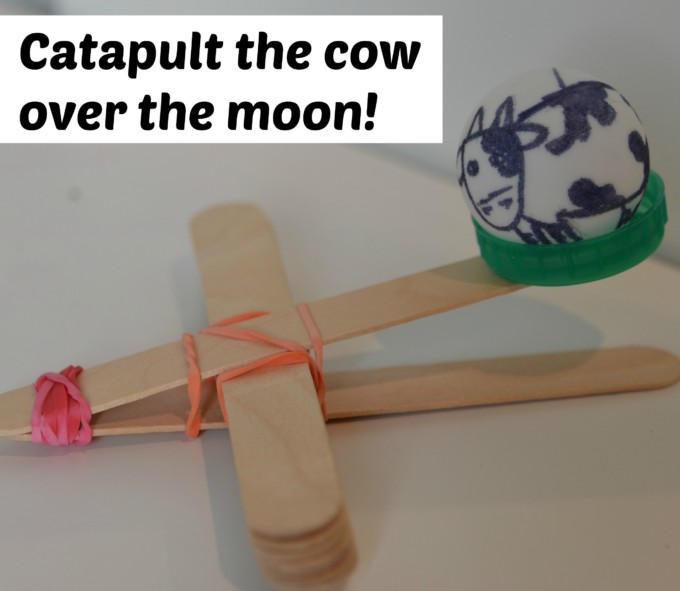 « Science on holiday
How much sugar is in kid’s drinks? »