I’m so pleased to be sharing this fab and very topical activity from Kelly at Domestic Goddesque. Thanks so much for sharing Kelly, we love how you turned your observations of the floods into a fun science activity.

January has seen more than double the usual annual rainfall for us in the South East. In fact, it has been the wettest January for over 100 years. Little surprise that last week, we didn’t make it to school one day because the road was flooded.

We did set out on the 20 minute drive to school but turned back when the situation became clear. The Girls saw the rising flood waters from their windows, the water pouring into people’s homes, the Fire Service pumping water out of homes. It gave us a lot to talk about. And as it was a school day, it gave us an opportunity to learn

First, I explained with a simple drawing the water cycle:

We coloured and cut out some images and words, and stuck them onto a round paper plate, to reinforce the idea.

Then we did three experiments to demonstrate how the cycle worked.

1. A simple water evaporation experiment: similar to the mini water cycle experiment, I filled a glass vase with boiling water and put a plastic plate across the neck that had a pile of ice on it. We saw the steam condense into droplets of water on the underside of the lid. 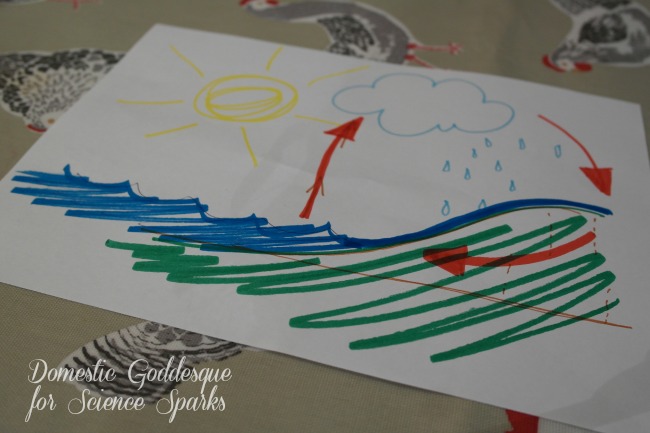 2. A rain experiment: Next I took a glass jar and filled it a quarter full with water. I used an upturned Kilner jar lid to support a “cloud” made from wet, though not dripping, kitchen roll. The Kilner Lids have a removable centre- if you don’t have one, you could try propping your tissue cloud with cocktail sticks or use a tea strainer. Pour a good glug of food colouring onto the top of the cloud- blue or red would undoubtedly work better than the yellow that I could find. Then slowly add more rainwater to the top. The coloured water will drip down from the “cloud” like rain, discolouring the water below and demonstrating both how clouds “rain” when “full” but also that the rain water mixes with water already lying on or in the ground.

3. I built a model of the land to demonstrate what happens when it rains:  using old dry playdough I made small rocks which I built up, so we had a mountainous area which dropped away to a flat area or Flood Plain. I moulded a playdough channel to make a riverbed, then I covered the whole thing in lentil “earth”. I had to work with what I had at home. The lentils did swell, so if I were doing again I would use something else, but the experiment was effective enough. I also added a rock “island” to the flood plain.

Then we took a jug of water to “rain” on the land. I added a small amount, which filtered through the earth and rocks and sat on the bottom of the glass dish, and talked about how this was the Water Table- the constant level of water under the earth.

Then we made it rain and watched the water flow down the river. Slowly the Flood Plain filled up.

Then we poured masses of water in- demonstrating current weather conditions and saw how the whole area became flooded and the island disappeared.

The Girls spent about an hour after this taking water out- demonstrating evaporation- and pouring it back on, making the tiny island disappear and reappear. It was a surprisingly effective way of demonstrating the way that too much rain leads to flooding: my daughter gave a very good presentation to her class the following week when she was back in school.

Kelly is the face behind the vintage silhouette at Domestic Goddesque, is part of The Motherhood, and is a Contributing Editor at BritMums. She has recently moved beyond the fringes of Greater London to the Kent countryside (though still within eyeline of the M25) and has added a few chickens to the family menagerie. Her day is spent chauffeuring children, learning how to cook with an Aga, encouraging the hens to lay eggs and trying not confuse the three. She is mother to two absurdly photogenic girls, wife to her beloved DH and master to the Wonder Hound. She drinks a lot of coffee and spends time on social media to make up for the fact that she doesn’t get out much. You can find Domestic Goddesque on Twitter,Facebook, Google +, Pinterest and Instagram. Do stop by and say hello!