Have you seen Cubetto has arrived?? Check out the Cubetto Kickstarter campaign which launched TODAY for more  exciting information. 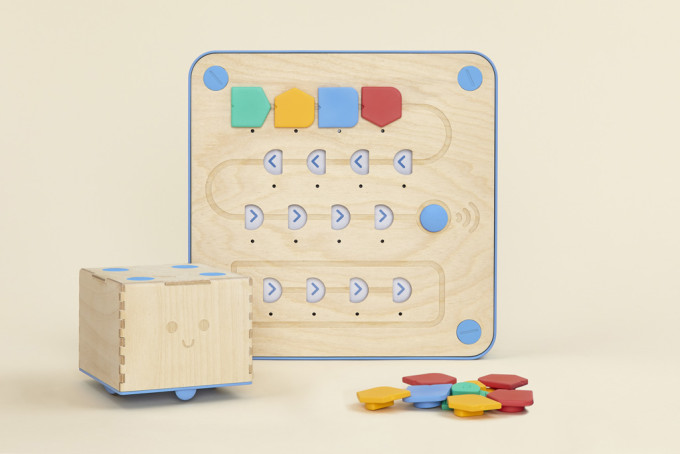 If you haven’t yet seen this playful wooden robot from Primo Toys, you’re in for a treat. Cubetto is designed for children ages 3 and up to help them learn the basics of computer programming, along with other STEM skills too. Unlike other similar coding toys, which have really boomed in recent years, it doesn’t use a screen, but comes with a set of instruction blocks that equate to a coding language you can actually touch.

The playset is beautifully packaged and very visually appealing. My children couldn’t wait to get started. 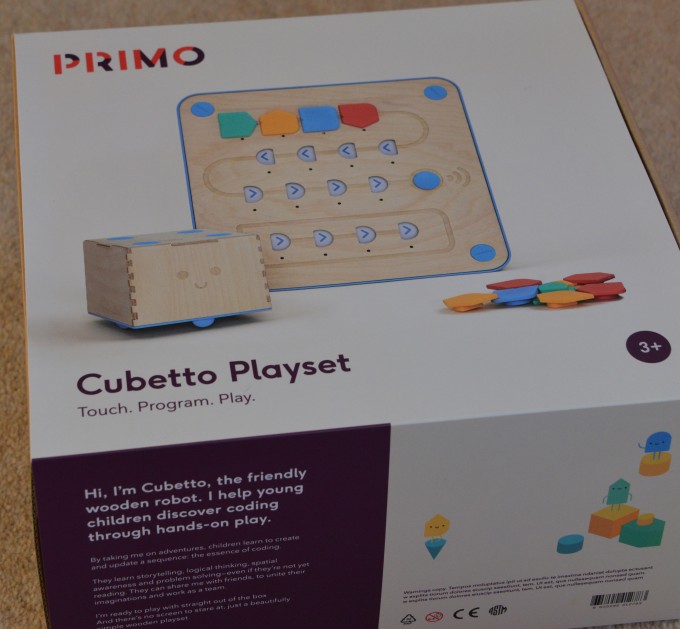 What’s inside the box?

1) Cubetto itself, which is a simple wooden cube with two wheels on the bottom and a cute, friendly smile on the front. It’s up to you to instruct Cubetto where to go and how to get there.

2) An interface board. This is the keyboard and command line, the tool you use to send instructions to Cubetto.

3) And, of course, 16 instruction blocks, which come in four shapes and colours. Green is forward, Yellow is left 90º, Red is right 90º and Blue is function.

Outside the box, but also included with the playset, is an illustrated floor map drawn on top of a grid to help you plan your next adventure with Cubetto. 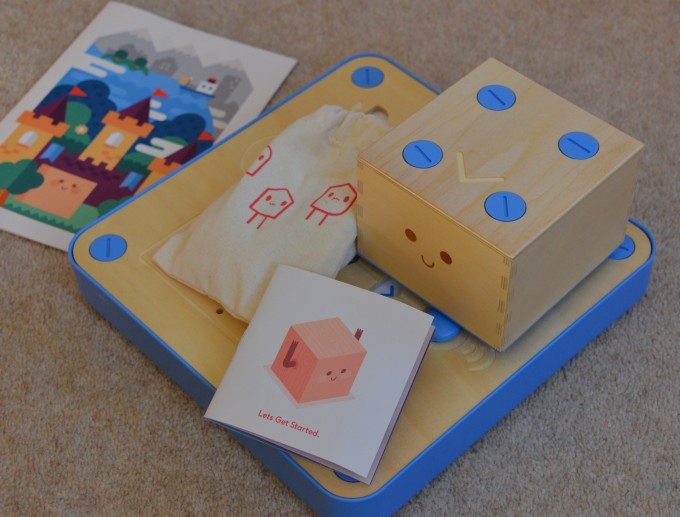 What can you do with it?

The nice thing about Cubetto is that it’s very simple to set up. Just insert the batteries, turn it on and you’re ready to go, when you’ve got three excited children who cannot wait to start, this is a big advantage!

After that it’s entirely up to the child or children playing with it what kind of adventure they want to take Cubetto on, either using the world map or creating other obstacles to negotiate Cubetto around.

There are 50 billion combinations that the blocks can be set in, so every time you play with Cubetto, it’ll be a unique journey.

We had fun with a couple of different exercises. In the first, we plotted a route for Cubetto around the outer space floor map, while telling a story about how Cubetto got there. It ended up a cross between Star Wars and and a weird alien book, but was hilarious to watch.

We also had a go at building our own roads for Cubetto, creating various obstacles from everyday items and navigating Cubetto around them from start to finish in just one press of the Go button. The more complicated the route, the longer it took to work out the sequence of instruction blocks using trial and improvement. I was really impressed that even my usually impatient 8 year old took his time to work out what Cubetto needed to do and even helped his sisters out on their turn. 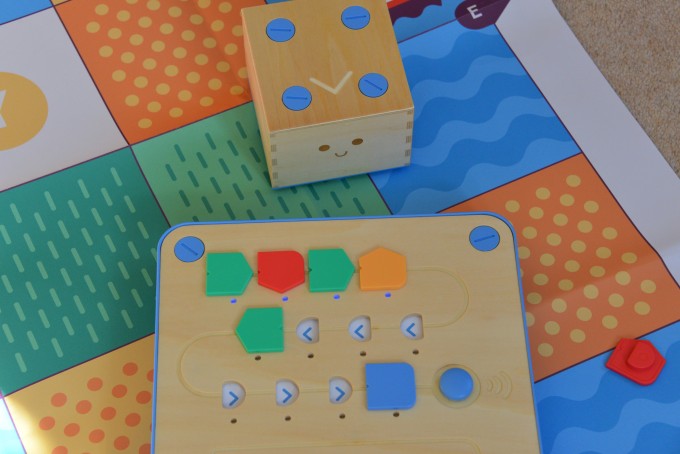 What do you learn?

As I mentioned before, the aim of Cubetto is to make programming accessible to children in preliterate years, introducing core programming concepts like debugging, the queue, and recursions, which are key elements of computational thinking (basically the process of breaking down tasks into a logical sequence of steps to reach an objective).

By taking programming away from the screen, and using a hands-on, block-based programming language, Cubetto develops these skills and logic in a way specifically tailored for early learning.

But there are wider benefits too

Inspired by Montessori’s ‘hands on’ principles, it’s also designed to encourage storytelling, creativity and invention, and because it can be played with in groups, teamwork and communication skills develop too. i was really impressed with how my three worked together to solve problems.

I should add that educators in over 40 countries are already using Cubetto as a creative way to inspire other subjects like science, geography and history.

An inclusive design for children everywhere

Part of Primo’s mission is that Cubetto becomes a toy that girls and boys use around the world. As a result it’s been specially designed so that whatever language a child speaks, and whatever background their from, it’s intuitive to use.

As well as helping children with various disabilities, Cubetto is the first hands-on programming system that can be used by both sighted and non-sighted children in the same setting – creating an equal learning environment that promotes inclusion.

I feel very strongly that although there is a place for screen based learning nothing can replace real hands-on experience, so I personally love the fact that Cubetto doesn’t have a screen and am very excited by the possibilities.

We’re just getting started with Cubetto, but I know my kids are going to learn so much and I am very much looking forward to sharing our creative, imaginative and learning adventures with you next week, keep an eye out on my YouTube channel for a video as well.

We were sent a Cubetto for the purpose of this review

« How to make a Squeezy Bottle Rocket
HEXBUG Activity Ideas »