Continuing with our Summer of LEGO, today we’re sharing this fun balloon powered car made from LEGO.

A balloon powered car is a great way to learn about kinetic energy, potential energy, conservation of energy and Newton’s Laws of Motion. When you blow up a balloon it stores potential energy in the form of the stretched skin of the balloon and compressed air inside the balloon.

When you let go of the balloon the stored energy is converted into kinetic energy as the balloon flies around ( some energy is also converted to heat because of friction ). The laws of conservation of energy say that energy doesn’t disappear, but changes to different forms.

How to make a balloon powered car

We added a section on the back of a LEGO car to hold a balloon, blew up the balloon and then watched  the car zoom along as the air escaped from the balloon

We need to spend a bit more time perfecting our design, but this was a good start and gave us lots of ideas going forward. 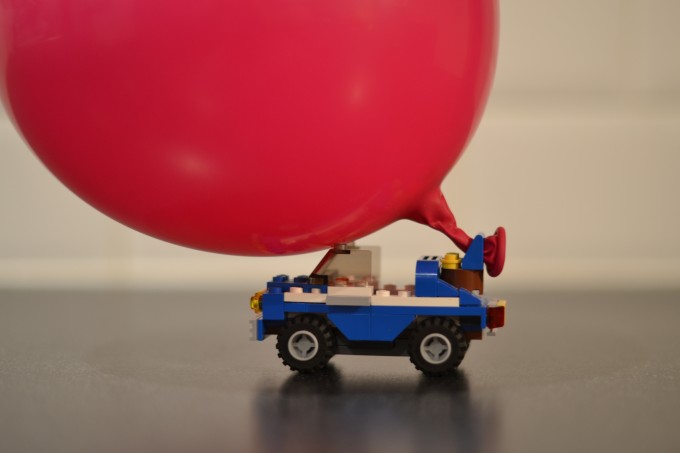 Do you think it would work better with a bigger or smaller balloon? 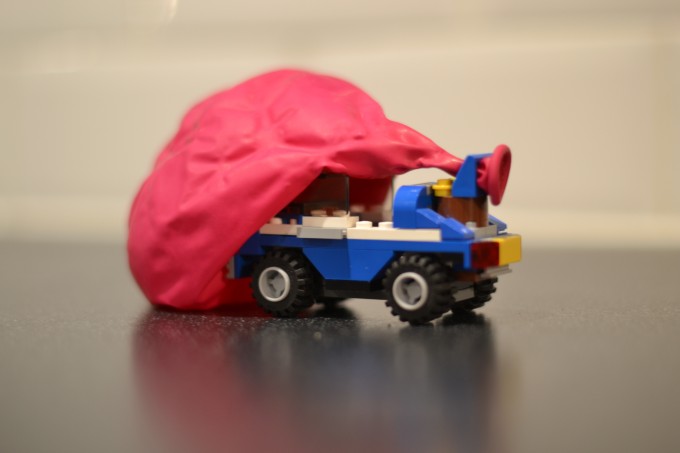 Our car fell over quite a lot,  I think a lighter wider car would work better, as it would be more stable.

You could try placing a straw into the end of the balloon to make it easier to blow up each time.

Our balloon powered car is also a great example of Newton’s Third Law of Motion.

For every action there is an equal and opposite reaction

Air is forced out of the end of the balloon, which means there must be an equal and opposite reaction pushing the car forward!

You can also see this in action with a water powered bottle rocket.

Design your LEGO car first then think about the features the car needs to work well, considering the points above.

Can you build your car following your design?

What would you change?

« How to build a stable LEGO Bridge
Does it Sink or Float? – Pirate Style »