Welcome to the first post in a new series about inspirational women scientists. Women throughout history have made huge contributions to science, technology, engineering and maths fields, but have often been overlooked. I’m going to highlight just a few of these pioneering women together with some simple science ideas related to their work.

The first scientist we’re going to learn about is the wonderful Katherine Johnson. Katherine’s work was mostly unrecognised until very late in her life. She opened doors and created pathways for women and people of colour in STEM fields, leaving behind the most incredible legacy.

At the bottom of this post is a FREE downloadable fact file and suggested activity related to Katherine Johnson’s work. 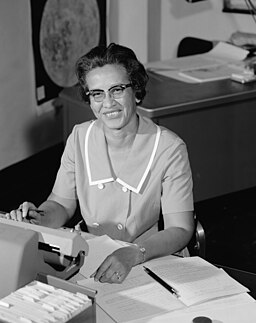 Who was Katherine Johnson?

Katherine Johnson was an African American physicist and mathematician.

She was the first African-American woman to attend graduate school at West Virginia University and is known for her work on the United States’ aeronautics and space programs.

Katherine was one of the NASA “human computers”. These were women mathematicians who performed calculations that allowed NASA firstly, to put astronauts safely into orbit then onto the Moon!

Katherine calculated the trajectory for the 1961 space flight of Alan Shepherd and when computers were first used it was Katherine who checked their calculations were correct!!

Katherine also worked on the space shuttle program and in the later part of her career spent time inspiring students to follow a STEM Career.

A similar type of rocket can be made using foam and cardboard, or a wider segment of straw sealed at one end.

The NASA website has some brilliant ideas for activities related to Katherine Johnson that we can’t wait to try!

My book This IS Rocket Science contains 70 space themed science experiments perfect for learning about the incredible engineering and science needed for space travel.

I’ve put together a printable fact file for you to download too!